Please contact your legislators and ask them to co-sponsor S179/A3110. You are represented in Trenton by one Senator and two Assembly members. You can locate your legislators here. To make it easier, please enter your address below to automatically identify your state legislators. Click on Start Writing. Please feel free to modify the sample letter to personalize it for maximum effect.

In 1984, the New Jersey legislature banned the sale, use, possession, importation and transportation of any type of steel-jaw leghold trap.  New Jersey’s is the strongest leghold trap law in the country.

On June 9, 2015 the New Jersey Fish and Game Council (FGC) voted to adopt a regulation allowing the use of three “enclosed foothold” traps, circumventing the 1984 law. It is the second time that the Council, along with the fur trade and the Division of Fish and Wildlife, has tried to undercut the statute by trying to regulate a modified steel-jaw trap. The “new” trap is a  type of steel-jaw leghold trap.

APLNJ, the Animal Welfare Institute, Born Free, New Jersey Chapter of the Sierra Club and other organizations filed a lawsuit against the Council. Incredibly, a lower court simply deferred to the state agency, ignoring a previous Superior Court ruling supporting the ban as well as the opinion of Irwin Kimmelman, Attorney General at that time (the closer an Attorney General’s opinion to the passage of the law, the more weight it carries).

As APLNJ’s commentary (below) in the Star-Ledger explains, deference to bureaucracies is automatic; in this case, however, the agency is the entity from which the law must be protected.

The New Jersey Supreme Court is not hearing the case, so we are pushing for passage of S179/A3110.

No person shall manufacture, sell, offer for sale, possess, import or transport an animal trap of the steel-jaw leghold type.

No person shall take or attempt to take any animal by means of a trap of the  steel-jaw leghold type. 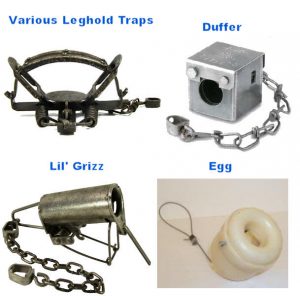 “Enclosed foothold traps” (pictured right: EGG™, Duffer Trap™, Lil Grizz Get’rz™) are jawed, spring-operated types of leghold traps that snap shut on the foot or leg of an animal to inflict pain, injury, anxiety and fear, and attendant injuries and suffering. The traps restrain the animal for prolonged periods of time.

Incredibly, the Appelate Division simply deferred to the game council, the very entity from which the law must be protected. For Star-Ledger and Press of Atlantic City editorials against the court’s decision, please see November 2, 2016 media below.

As many will remember, thirty years ago, the state’s Attorney General and the Superior Court defended the statute from a similar move by the council, yet this panel of three judges court never examined the record.

Our appeal with the New Jersey Supreme Court will not be heard.

How was N.J. court convinced these bone-crushing traps are humane?

Controversial animal trap can be used in N.J., court rules

With leghold traps there is no debate: They are inhumane