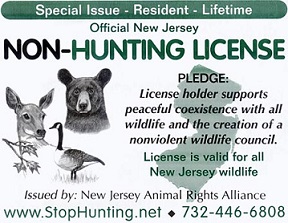 UPDATE: 11/1/19 – The town of Edgewater continues to only employ nonlethal for Canada Geese)

2.27.17 – MAYOR ANNOUNCES THAT EDGEWATER, NJ WILL NOT BE SIGNING USDA CONTRACT TO KILL GEESE

Despite signing an earlier contract with USDA to round up and kill Canada geese, last July Edgewater’s Mayor Michael McPartland claimed that the town was going to use nonlethal methods. Since August, APLNJ volunteer Jim Mazzone has attended each town meeting to monitor Edgewater’s goose plans and to hold the mayor to his statement. A few days ago Jim reported that the Mayor McPartland told the public that Edgewater had not renewed the USDA contract and that it plans to pursue nonlethal strategies. Bergen Record Article (July 18, 2016) Excerpt:

“McPartland also turned down an offer by activists to help fund and implement habitat modifications and other non-lethal methods of goose population control.‘We do our own research,’ McPartland said. ‘We’re going to modify, and we’re going to make all those changes on our own.'”At the February 21, 2017 meeting, Jim asked the mayor to explain the town’s position. Please click on the audio link below to hear the message that Jim left for Doreen Frega, associate director of outreach and advertisement and one of APLNJ’s Edgewater campaign coordinators.  Jim did a fabulous job, even though he felt out of his comfort zone and had worried about the approaching meeting all day. We understand that feeling all too well, Jim, but you did what needed to be done. We’re proud of you!

APLNJ’s Canada goose advocacy program can be used as a model for other localities that continue to employ cruel and ineffective USDA killing methods.

We thank all of the activists and local town folks who came to meetings and protests, and everyone who helped with educate the public, donated toward the billboard, cleaned up the goose poop and more. Your efforts paid off.

APLNJ offered to financially support the completion of nonlethal methods, but the town refused to accept our offer.

The above actions will result in dissuading Canada geese from targeted areas without Edgewater resorting to gassing the birds.

Thank you to those who came to support the protests and to everyone who spoke at town meetings, which were critical to the success of this important project.

As of 5-16-2016, the number of Edgewater residents who have signed LOHV-NJ’s paper petitions is over 500! Thanks to the relentless volunteers who have made this possible.

About Geese and Solutions

Residential Canada Geese lost their biological need to migrate to Canada because in the early 20th century, they were captured for use as live decoys, their feathers clipped, and as a result, lured other birds to lakes, wetlands and rivers.

These captive geese were also bred in captivity. Canada geese always nest in the area where they were born so the main objective of any successful program to reduce geese in a particular area must prevent the geese from nesting.

Fortunately, there are many nonlethal ways to achieve long-term objectives. Habitat modification is the number one solution. Stop public feeding, which can result in the geese becoming dependent on unnatural food sources and cause permanent angel wing deformities, making the goose unable to fly.Mechanical scare devices, flags, and noise are effective when combined with other methods. Flight Turf is another habitat modification method.

When going ahead with plans to cruelly gas Canada geese in June of 2016, Edgewater Borough officials claimed that they tried habitat modification, the most effective way of deterring geese, and that it “didn’t work.”

The Borough cannot identify what was done, or where. APLNJ dispatched volunteer teams to scout and photograph each location where the Borough said geese were causing problems. See landscapes and evidence of feeding here.

The photos show Edgewater municipal lands scheduled for lethal goose round ups and gassing to be mowed turf grass, bordered by pieces of cement, rip rap or piled rocks, sidewalks, and water. There is no evidence of any serious effort, or any effort at all, to modify landscapes.

These are textbook examples of how to attract, not discourage, Canada geese. We should be seeing the planting of long grasses and strategically placed native shrubs and wildflowers, and in some instances perhaps the installation of a few gates, fences, or deterrent wires.

Other photos show geese eating food on the sidewalk and at least one goose with “angel wing,” a deformity caused by poor, unnatural diet associated with human feeding.

Edgewater and the USDA

Since 2013, Edgewater has contracted the USDA to employ nest and egg destruction, capture, gas, and kill the residential Canada geese. These methods have not solved Edgewater’s Canada Geese problem.

NOTEWORTHY: Bergen County Freeholders passed a resolution against the killing of Canada Geese in 2010. Edgewater can do the same thing.